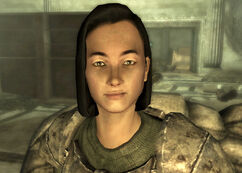 Sydney is an independent mercenary who specializes in obtaining relics. She prefers going for the most dangerous scores (like the Declaration of Independence) and takes risks. She is beautiful, but finds men approaching her irritating. She is a loner. She prefers not speaking about her dark past. When she was very young, her mother was raped and killed by raiders. She spent years perfecting her combat skills and never welshes on a deal.[1][2]

Sydney was orphaned when her father was killed after a deal gone bad at the Statesman Hotel. She had to wander the wasteland alone, but she was able to handle herself as her father had taught her how to handle and maintain and modify firearms at an early age. Sydney eventually became a relic hunter when she stumbled upon a deceased relic-hunter and his information to the Constitution of the United States. After she recovered it, she sold it to Abraham Washington. Afterward she took the job to acquire the Declaration of Independence.

Eventually she becomes a weapons dealer out of Underworld.

*If she finishes the quest alive and makes it to Underworld.

Retrieved from "https://fallout.fandom.com/wiki/Sydney?oldid=3428303"
Community content is available under CC-BY-SA unless otherwise noted.
... more about "Sydney"
RDF feed
Has platform
PC +, Playstation 3 +, Xbox 360 +  and Xbox One +