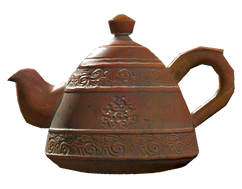 Sweetwater Special Blend is a drink in Fallout 76.

A sweet and mildly alcoholic tea with surprisingly subtle flavours[1] which is brewed and served by Giles Sweetwater at the Giant Teapot. It must be steeped at precisely 205 degrees to achieve its optimal flavor.[2]

Due to Herbivore and Party Boy/Party Girl both affecting Sweetwater Special Blend, it is possible to boost the PER buff to +15 when used in tandem with Strange in Numbers.

Retrieved from "https://fallout.fandom.com/wiki/Sweetwater_Special_Blend?oldid=3379874"
Community content is available under CC-BY-SA unless otherwise noted.