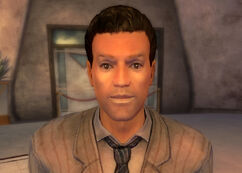 “Man, we're only the coolest cats on the whole Strip. We been here the longest, we got the swankiest digs, and we got caps rolling in like the tide. Everybody loves the Chairmen, because we show them a simple good time, no strings attached.”

Swank is the right hand man of Benny for the Chairmen in 2281.

Swank has been Benny's right-hand man since Benny took over the Boot Riders and were made into the Chairmen.

In All Roads, Swank carries out Benny's orders to poison the Singer with "Vegas" (aka Psycho).

Swank appears in Fallout: New Vegas and All Roads.

Swank in All Roads
Add an image to this gallery
Retrieved from "https://fallout.fandom.com/wiki/Swank?oldid=3125616"
Community content is available under CC-BY-SA unless otherwise noted.