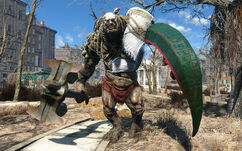 “Stay back! Let Swan deal with him.”— Male raider giving an order

Swan, born Edgar Swann, is a unique super mutant behemoth living in Swan's Pond, the center of the Boston Common in 2287.

Swan was not always a monster. He was originally Edgar Swann, a low level Institute worker who found himself on the wrong end of the law after stealing cigarettes. He believed his trial worked out in his favor, offered "probation" in the form of living in isolation for a month, provided with food, water, and shelter, only requiring him to write in a journal. Unbeknownst to Swann, he had been infected with FEV and the probation he accepted was a ruse to observe the effects.[1]

By the sixth day, Swann realized something was wrong when the scientists returned for additional tests. His body ached and he felt jittery and agitated. His mind was racing and he felt as if he could hardly write. He knew the scientists had done something to him, but he was not aware of what it was.[2]

Two weeks into the experiment, Swann's condition stabilized and improved by all accounts. He had experienced a threefold increase in muscle mass and a major increase in intellectual capacity. Swann was now privy to the experience in its entirety but was enthusiastic about it, even having applied to the research team, anticipating assisting in his own experiment.[3]

However, Swann found that by the third week of the experiment, his mental facilities were backsliding. He experienced seizures and returned to the observation lab. He understood that his prognosis was poor and learned that the viral strain he was infected with is fundamentally unstable. His health rapidly deteriorated and he knew that the seizures were only the beginning of the side effects he would endure. He anxiously waited to discover his own fate, worrying the scientists would reject him as they had done for so many others.[4]

Swann's fears of being exiled to the Commonwealth were realized and he eventually made his way to Boston Common, an abandoned park in the downtown ruins, where he made his home in the groundskeeper shack. It was here that he finally lost his mind to his mutation,[5] eventually creating armor from the ruined swan boats of the pond, having turned into a super mutant behemoth by 2287.[6] His experiment logs are found scattered around his living area.

The area in which Swan lives is considered extremely dangerous and wastelanders avoid it at all costs. Makeshift signs warn of his presence as one approaches Boston Common. Raiders chasing the Sole Survivor will refuse to advance into Boston Common. The bodies of victims who did not heed the warnings are strewn around the area.[7][8][9][10]

Swan has a schedule that is uncommon for scripted characters. Around 1:00 AM to approximately 5:30 AM, he roams around the edge of the pond. The rest of the day he spends submerged in the water.

Edgar Swann appears only in Fallout 4.

His backstory seems to be inspired by the book Flowers for Algernon by Daniel Keyes, sharing many similarities with the main character Charlie Gordon.

Swan emerging from the pond

Swan roaring in the pond
Add an image to this gallery

Retrieved from "https://fallout.fandom.com/wiki/Swan?oldid=3289070"
Community content is available under CC-BY-SA unless otherwise noted.