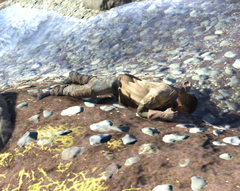 Survivor story: Kesha McDermott is a holotape in Fallout 76.

It can be found on Kesha McDermott's body, along the Flatwoods river, during Thirst Things First.

Kesha McDermott: Dassa asked us all to document our stories for posterity, you know. Seems like a fine idea. So hi, I'm Kesha McDermott.

When the bombs fell, I was in Watoga coordinating a state-wide science fair for that year's high school kids. The theme was, "the Future of Energy!" After the bombs, everything was pretty chaotic. Scavenging for food, fighting off rabid survivors, just a bad time all around. I found a couple of surviving kids from the high school whose parents didn't make it, and we holed up in an old house in town for a while. After a bit, I was able to solder the circuitry in an old radio and we tuned in to a broadcast from the Responders. We were overjoyed!

The trip from Watoga to Flatwoods was rough, mind you. The kids and I ran into a group of assholes in the mountains who stole our food and water. I can't tell you how happy I was to find the Responders in Flatwoods. Tents for everyone, open kitchens, medical supplies, protection - we were safe. They had a problem though: their water sources were contaminated heavily. People were boiling water, but not long enough to make it safe.

So I stepped up, I said: "I'll build a testing kit to monitor the contamination, and I'll teach folks how to properly boil water." And I did. The world is getting better, but slowly. We need to make sure it doesn't relapse, too. It's going to take time and care, that's all. Well -- time, care, and science!