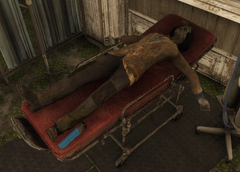 Dassa's body in the Flatwoods Church prior to Wastelanders

Survivor story: Dassa Ben-Ami is a holotape in Fallout 76.

It can be found on Dassa Ben-Ami's corpse, near the graveyard behind the Flatwoods church.

Dassa Ben-Ami: We call it the Great War now. It's not been long, and things have been rough. Welcome to Survivor Stories. I'm Dassa Ben-Ami, a Responder. I've been working with the Responders for a couple years now. I'm from Charleston originally, so it was easy to join up. What wasn't easy was the work. Rebuilding Appalachia from the rubble while survivors flock to us regularly from all over. So many have come and gone, their stories untold, their names lost to time. I thought we should preserve this history somehow.

I've decided to ask people to record their thoughts, their stories, anything they want to preserve forever. I'll call this series the Survivor Stories.

I'll start with me. I was an anthropology PhD student at Vault-Tec University. Final year. I was printing my thesis when I heard the sirens... I thought for sure my father, a Vault-Tec employee, could take us all with him, but... only two reservations came through. I refused to go. With my little brother, he went into the Vault. They could not persuade me, though they tried. In the end, I pushed them inside and that was it. After that, I went back home to Charleston and... well.. survived. Eventually the Responders formed and I signed up right away.

It was so hard. The flood... was devastating. Relocating to Morgantown Airport and now Flatwoods has been... well... I remain optimistic. Been with them now for... I guess 2 years. We have big plans! We can do so much to help. Maybe, just maybe, we can rebuild enough to be okay. And in the meantime, I will continue to record stories of survivors when I can. We are your history. This is Dassa Ben-Ami, signing off for now.

Prior to the Wastelanders update, Dassa Ben-Ami's corpse and this holotape could be found lying on a stretcher inside the Flatwoods church.