The Survivalist's rifle is a weapon in the Fallout: New Vegas add-on Honest Hearts. It is the unique variant of the service rifle.

Chambered for the 12.7mm round, the weapon was issued from the Long Branch Arsenal in Ontario, USA territory. It once belonged to Randall Clark, a former US soldier and survivalist who took refuge in Zion National Park after the Great War. The gun reads, "PROPERTY OF U.S. GOVT CHKPNT CARBINE 12.7MM CAL." and "LONG BRANCH ARSENAL ONTARIO, USA TERRITORY." The stock has "STOP!" carved on one side and "ARRÊT!" on the other.

The rifle has a high rate of fire, relatively low spread, respectable AP cost and high damage that can be raised considerably with the Grunt perk. When looking through the iron sights to aim, the forward sight is bent out of line with the rear channel on top of the carrying handle, thus not creating the sight picture seen when using an undamaged service rifle. However, using the upper right side of the bent front sight as the aiming point corrects this.

The damage stat of the Survivalist's rifle is slightly higher than This Machine when loaded with regular .308 rounds if the Grunt perk is taken, but the former fires nearly twice as fast and far more accurately. Even if This Machine is loaded with .308 JSPs, the difference in damage is not substantial and can be mitigated by using 12.7mm JHPs from the add-on Gun Runners' Arsenal.

The rifle uses rare 12.7mm rounds which generally must be bought from vendors. The Damage Threshold multiplier from 12.7mm JHP rounds and lower damage from normal 12.7mm rounds may also cause the Survivalist's rifle to be less than optimal against armored targets.

The Survivalist's rifle can fire a total of about 2,495 standard rounds, the equivalent of 250 reloads, from full condition before breaking.

This weapon does not count toward the Gun Runners' Arsenal "Against All Tyrants" challenge, as the add-ons cannot overlap without causing substantial bugs. 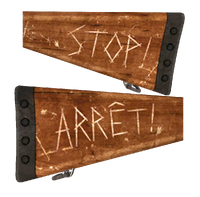 The carved words on the rifle's stock