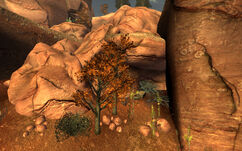 The Survivalist's cache is a unmarked location in Zion Canyon in 2281. The name comes from an unused map marker placed at the location.

Found southwest of the Aerie on the river's bank, the Survivalist's cache consists of a toolbox and a single explosives crate placed against the cliff wall, partially hidden by trees, brush, and nearby broc flower plants.

Both the toolbox and explosives crate contain random, high-level crafting and/or explosives loot. The explosives crate, in particular, will always contain at least one detonator and has a high chance of containing valuable explosives items such as grenade rifles, or C-4 plastic explosives.

The Survivalist's cache appears only in the Fallout: New Vegas add-on Honest Hearts.

A map marker exists for the Survivalist's cache, still placed at the location but marked as disabled, and thus unobtainable.

Retrieved from "https://fallout.fandom.com/wiki/Survivalist%27s_cache?oldid=3309136"
Community content is available under CC-BY-SA unless otherwise noted.