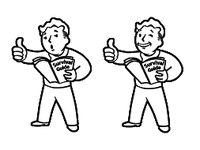 Survival Expert is a perk in Fallout 3 that gives different rewards. It is given by Moira as a reward for completing the Wasteland Survival Guide side quest.

The table below lists possible perk benefits. The benefit received will be based on how many optional bonus objectives have been completed, and how the Lone Wanderer chooses to answer Moira's questions. There are different answer choices depending on stats that are equal to or greater than 7, which can be adjusted through the use of apparel and aid.

Note that not all of them will appear after a given task; answers change from objective to objective. "Perk itself" means it is given by default, with bonuses on the right depending on the style of the answers. The perk obtained is determined by the type of answer picked the most, and how many optional objectives are completed.

The perk received may not correspond with the description of the Wasteland Survival Guide book, as completing two objectives per chapter will still result in the worst possible book description, but earn the middle-ranked perk.

When completing Anchorage Reclamation simulation, the radiation resistance granted by this perk may be applied a second time; therefore, if having 6% radiation resistance granted by the perk, upon exiting the simulation it will be 12%. This bug may occur on other occasions as well. On PC versions, this can be fixed by removing and re-adding the perk through the console. [verified]