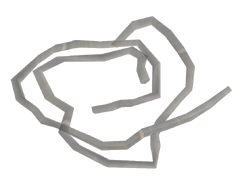 Surgical tubing is a miscellaneous item in Fallout 3 and Fallout: New Vegas.

A coil of clear, stretchy latex tubing, typically used to pump fluids in or out of patients during surgery. Surgical tubing can often be found anywhere medical procedures have taken place.

This item is used in the construction of the dart gun in Fallout 3, and the doctor's bag and the mass purified water in Fallout: New Vegas. It is also used for crafting the snakebite tourniquet in the add-on Lonesome Road.

Surgical tubing is a moderately common item located throughout the Capital and Mojave Wastelands, but does not spawn in containers and can be difficult to spot due to its transparency. It is often found in hospitals, clinics, and medical centers, frequently nearby surgical carts, gurneys, and operating tables. Some vendors may have them for sale.

Retrieved from "https://fallout.fandom.com/wiki/Surgical_tubing?oldid=3244147"
Community content is available under CC-BY-SA unless otherwise noted.