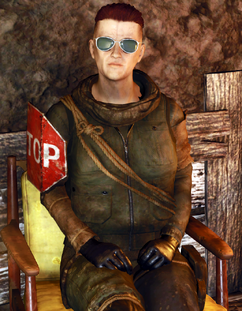 Surge was trained to shoot from a young age "as soon as [she] could hold a pistol straight" by her father and became an expert marksman with surgical precision, earning her her nickname. Her father was no pushover either, once killing three yao guai with only a pistol. However, even that could not prevent his death from heart failure. After he died, Surge wandered the Appalachian Trail and met Lev as he fought super mutants, joining him and ending up at the Crater.[2]

She dislikes Meg's open-arms policy of allowing all sorts of mutants to join the raiders, believing that it will end up getting them killed one day. She also dislikes Johnny Weston and his propensity for cheating at cards. However, she is fond of Molly and her drinks.[3]

Surge appears only in Fallout 76, introduced in the Wastelanders update.

A cut note known as Surge's letter reveals that her real name is Maxi, and that she lived in a bunker growing up. Her father disapproved of her romantic pursuits with boys like Hank and Wade.

Retrieved from "https://fallout.fandom.com/wiki/Surge?oldid=3449734"
Community content is available under CC-BY-SA unless otherwise noted.