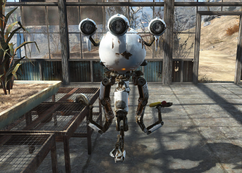 Supervisor White is a modified Mister Handy with a female personality and white paint found in Graygarden in 2287.

Supervisor White was created before the Great War by Doctor Edward Gray. Unlike the other Mister Handy robots at Graygarden, she, along with the two other supervisors Brown and Greene, was designed with distinct personalities and voices based off of Gray's favorite television show characters. Gray gave White a feminine personality to differentiate her from the standard Mister Handy personality.[1]

White, designed to be a supervisor of the garden, was also given sophisticated cognition processors, enabling her to be able to perform complex analysis and decision-making.[2] With the help of supervisors Greene and Brown, she ran the facility for over two centuries without a problem. In 2287, she has noticed lower water pressure in the facility as well as radiation-contaminated water coming in from the Weston water treatment plant and is looking for anyone willing to fix the problem.[3]

Supervisor White appears only in Fallout 4.

Retrieved from "https://fallout.fandom.com/wiki/Supervisor_White?oldid=3399008"
Community content is available under CC-BY-SA unless otherwise noted.