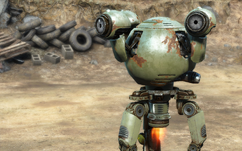 Supervisor Greene is a Mister Handy in 2287 at Graygarden as a merchant.

Supervisor Greene is an olive green Mister Handy model robot with a personality modified into that of an archetypal game show host. He, along with the two other supervisors, White and Brown, have much more advanced "cognitive processors" than the typical Mister Handy, which gives them distinctive personalities derived from the favorite television show characters of their creator, Dr. Edward Gray. Greene offers limited merchant services akin to a general goods trader.

Greene will almost always be found tending the settlement's mutfuit orchard, and will from time to time engage in conversation with the other supervisors.

Supervisor Greene appears only in Fallout 4.

A brand new car!
Add an image to this gallery
Retrieved from "https://fallout.fandom.com/wiki/Supervisor_Greene?oldid=3261645"
Community content is available under CC-BY-SA unless otherwise noted.