“A mixture of leather and metal patches, held together by rubber straps. It can only be worn by ghouls.”— In-game description

Superior ghoul armor is an armor in Fallout Tactics.

There are no known locations where superior ghoul armor can be purchased, it only appears on several ghouls already equipped with it. These include Elliot Nesting, Jacob Young, and Martin, however, it cannot simply be stolen off of an NPC as a special weapon would. Martin is a ghoul recruit who becomes available as the Warrior progresses, and because they have access to the inventories of characters in their recruit pool they can simply bring Martin into the squad out of the pool and make him drop his superior ghoul armor. A different ghoul character in the squad can then equip the superior ghoul armor. 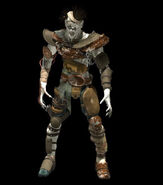