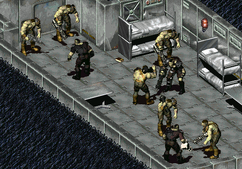 The guards in Mariposa Military Base level 1

“You see a mutant with a phenominally

The super mutant guards are guards found in the Mariposa Military Base of 2161, tasked with guarding the base for the Lieutenant.

This section is transcluded from Super mutant. To change it, please edit the transcluded page.

The Mariposa super mutants are a variety of super mutants common on the West Coast and in the Midwest that originated from the Mariposa Military Base in California. While some of them can be rather stupid, in general, they are more intelligent and civilized than their distant Huntersville, Institute, and Vault 87 cousins found in Appalachia, the Commonwealth, and the Capital Wasteland respectively. Their skin is also darker than that of their east-coast counterparts. The Mariposa strain is unique in that the mutants created by it do not continue to grow in size as they age, unlike the East Coast strains.

This section is transcluded from Super mutant. To change it, please edit the transcluded page.

Although there is variation between super mutant types depending on the FEV strain used and the contents of the recursive growth patterns used, there are many similarities. The average super mutant created by the Mariposa strain is 3.2 meters (10.5 feet) tall and weighs in excess of 350 kilograms (800 pounds). Muscle accounts for over 75% of body mass, while bone and tissue are 10% each. Fat mass is exceedingly low, accounting for between 3-5% of body mass.[1] The Vault 87 super mutants stand approximately over 2.44 m (8 feet) tall and the Institute super mutants are approximately 2.13 m (7 feet) tall. The increased muscle and body mass will lead to a change in posture: Mariposa super mutants have a characteristic, hunched stance, Vault 87 mutants have a distinct forward neck posture, while Appalachian and Institute mutants have a drooping posture. The skin becomes much thicker and resistant to trauma, including cuts, bruises and damage from fire, acid or even gunfire. Muscle and bone structure are enhanced well beyond the human norm.[1] Despite this resistance to trauma, completely destroyed tissues cannot be regrown, and will result in permanent scarring or organ loss.[2]

Super mutants like these guards are fearsome enemies, possessing great strength and endurance, and powerfully armed with heavy weapons. Incredibly dangerous, both at long range and in close combat, such enemies are not to be underestimated.

Retrieved from "https://fallout.fandom.com/wiki/Super_mutant_guard?oldid=3275461"
Community content is available under CC-BY-SA unless otherwise noted.