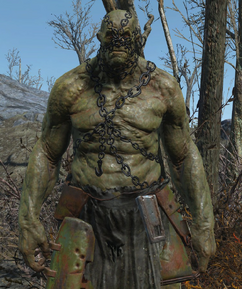 Super mutants chains are a piece of armor in Fallout 4.

Super mutant chains provide a Damage Resistance of 3 and an Energy Resistance of 5. The chains are considered as a piece of clothing, in that they can be worn by Strong with other pieces of armor over them and by the Sole Survivor.

The chains are often worn by super mutants encountered in the wasteland but they can only be recovered in the following locations :

Retrieved from "https://fallout.fandom.com/wiki/Super_mutant_chains?oldid=2845271"
Community content is available under CC-BY-SA unless otherwise noted.