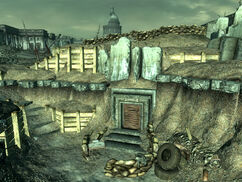 Between Museum of Technology
and Museum of History

If the super mutants outside are sufficiently damaged they may retreat, occasionally heading into the bunker.

The super mutant bunker appears only in Fallout 3.

Super mutant bunker, Duck and Cover
Add an image to this gallery
Retrieved from "https://fallout.fandom.com/wiki/Super_mutant_bunker?oldid=2869428"
Community content is available under CC-BY-SA unless otherwise noted.