Behemoths are powerful super mutants that have grown to an enormous size. Being the oldest and strongest of their kind, they lack intelligent speech, having to resort to guttural roars to communicate.[citation needed] Behemoths are armed with a fire hydrant still mounted to a massive water pipe. They also can throw heavy boulders from the shopping cart on their back. Despite the nature of FEV and its origins as the Pan-Immunity Virion Project, Huntersville super mutant behemoths are susceptible to the Scorched Plague.

Super mutant behemoths may be accompanied by super mutants. They will become Scorched when fighting scorchbeasts.

Scorched super mutant behemoths are marked as cut content, but are susceptible to being Scorched by scorchbeasts.[verified] 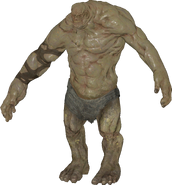 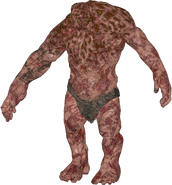 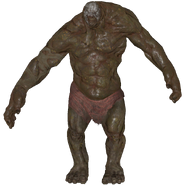 Behemoth in pond (side view)