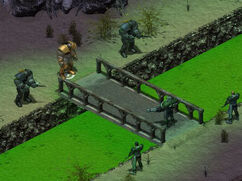 Toccamatta and the super mutants face Barnaky and the Paladins

Super mutants are characters living in the Midwest in 2197. They were created by the Master 40 years ago, are generally strong but stupid, and because of their bulk cannot wear human armor or use small weapons.

The super mutants, being led by Gammorin, have attacked local settlements and will not let the Brotherhood of Steel have the technology they search for.

After defeating Latham in Osceolla, some of the mutants will join the Brotherhood, supplying the ranks.

Retrieved from "https://fallout.fandom.com/wiki/Super_mutant_(Fallout_Tactics)?oldid=3091962"
Community content is available under CC-BY-SA unless otherwise noted.