The Best Defense
A Knight's Penance

The Appalachia Super Mutants were created shortly before the Great War, when the local West Tek facility contaminated the river water that ran through Huntersville with a unique strain of FEV as part of an experiment.[1]

They possess superhuman strength, allowing them to inflict serious damage with melee weapons. Super mutants are carnivorous and hunt all kinds of creatures and animals, including humans, Scorched and large predators, to devour them or stock their meat to build up reserves. Many bags of meat are strewn about in the fortifications of super mutants or carried in their inventory. Despite the nature of FEV and its origins as the Pan-Immunity Virion Project, Huntersville super mutant behemoths are susceptible to the Scorched Plague.

In 2103, a super mutant attack was mounted on Fort Atlas, multiplying via an unknown means,[2] and demonstrating threatening attributes to the recently-arrived Brotherhood First Expeditionary Force,[3] who were unfamiliar with them before their arrival.[4]

Most Huntersville super mutants travel in small, well-organized groups, often led by a much stronger super mutant. They wear randomly generated armor made from scrap iron or rubbish that can provide varying degrees of protection. These armors include a mask fashioned from a propane tank. They attack their opponents most often with rudimentary weapons like pipe rifles, boards or sledgehammers. Some carry more advanced weapons like laser sniper rifles, miniguns or even missile launchers. Others may throw explosives to attack from a distance. All super mutants may perform bash attacks in proximity, which will stagger their target.

Super mutants may be accompanied by mutant hounds, floaters or super mutant behemoths. They will not become Scorched when fighting scorchbeasts.

A chalky white super mutant with glowing red eyes created by Doctor Blackburn. They paint their bodies with smeared blood and are first encountered in Uncanny Caverns during A Knight's Penance. Berserkers will attack exclusively with melee - boards, sledgehammers or their bare hands. They are faster than other super mutants.

A powerful super mutant serving as a final boss for Daily Ops. They will be armed with a unique assault rifle modified to fire floater flamer grenades, and will occasionally throw molotov cocktails to burn player characters. Their orange-toned skin is covered with scar tissue. Their eyes glow a hot orange beneath white war paint depicting a skull.

A super mutant that will run at its enemy with a beeping mini nuke in its arm. It will then detonate itself while nearby by slamming the mini nuke into the ground like spiking a football, setting it off, killing its enemy and itself in a fiery nuclear explosion. Super mutant suiciders are easily identified by their lack of armor that other super mutants normally wear, blood red heads and shoulders, and chains crisscrossed on their torsos. Shooting the mini nuke in the suicider's hand or targeting the right arm in V.A.T.S. will cause the mutant to explode prematurely, killing it instantly. As a result, shooting the bomb from afar is one of the most effective ways to dispatch them, and potentially other nearby enemies as well. If one is desperate to kill a suicider and the only weapon types available are unarmed and/or melee, the player may either sneak attack it, or run up to it, strike it, step back a bit, and repeat until it's dead (though the latter is not advised as one missed attack will allow the suicider to detonate the mini nuke, and accidentally hitting the mini nuke with either type of attack will detonate it). The suicider can be detected before it is seen by listening for the beeping of its mini nuke. If the suicider is killed without detonating the payload, which can be done with a headshot or body shot, a mini nuke can be looted from its corpse; otherwise, only nuclear material will be found on its remains. 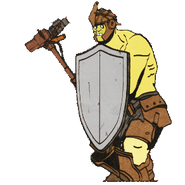 A shielded super mutant, as shown on the Retribution perk card