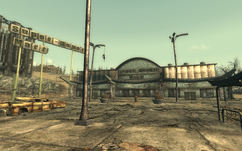 Super-Duper Mart in the morning.

The Wasteland Survival Guide
Those!
The Nuka-Cola Challenge

“Well, food and medicine. Everyone needs them once in a while, right? So they need a good place to find them! There's an old Super-Duper Mart not far from here. I need to know if a place like that still has any food or medicine left in it.”— Moira Brown

Super-Duper Mart is a grocery store located near the Potomac River. It lies northeast of Megaton, and northwest of Grayditch. It is completely overrun by raiders.

In front of the Super-Duper Mart is a large parking lot with hanging corpses indicating the raider presence inside. Two Nuka-Cola vending machines are against the wall of the store between the entrances, along with a pair of non-respawning raiders who engage in combat with anything they detect.

If it is the player character's first foray near Grayditch, one will likely encounter Bryan Wilks here once the hostiles are killed. The quest Those! can be initiated from his dialogue.

As the Lone Wanderer enters the Super-Duper Mart through the left door, the entry room contains a Nuka-Cola vending machine directly to the left, with scattered empty Nuka-Cola bottles around it. Upon entering the store proper, there will be a hallway on the left wall leading to the restrooms and through which raiders will enter the main area.

Entering by the right door allows the player character to enter just left of an area surrounded by a counter that contains about half the loot in the store. The right wall is patrolled less often and allows access closer to the back of the store without being spotted.

The majority of the store is made up of supermarket-style shelves that have planks acting as makeshift bridges between them. These are patrolled by raiders and contain very few useful items.

The pharmacy (room on the back wall) contains most of the remainder of the store's loot and houses a protectron that can be activated to help fight the raiders. The key to open it can be found in a metal crate in the mart. The door can also be lockpicked or opened by hacking the terminal next to it (Lockpick or Science of 25 required).

Shooting any of the check-out counters between the exits will cause them to bleed and produce a blood splat. [verified]

The entrance to the Super-Duper Mart

Protectron
Add a photo to this gallery