Lonesome Road
“Before you... this is the edge of the Divide. Ahead lies your work, the history you burned in the earth. What you brought to the people here.”— Ulysses

The Sunstone Tower roof is a location in the Divide in 2281.

The exit from the Ashton missile silo leads to the ground level of the Sunstone Tower. The interior has taken blast damage, with only two rooms narrowly avoiding destruction. Three levels must be ascended to access the Sunstone Tower roof. Pvt. Foster's personal journal part 1 of the Nostalgia challenge can be found in a duffle bag, south of the tower, surrounded by two mole rats.

Ulysses watching the Courier while descending the tower 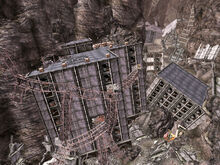