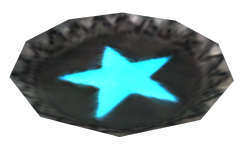 The Star Showdown
The Legend of the Star
A Valuable Lesson

A Sunset Sarsaparilla bottle cap with a luminous blue star on the bottom, bottles of Sunset Sarsaparilla were randomly capped with these as part of a promotion before the Great War, where participants needed to redeem 50 of them at the Sunset Sarsaparilla company's headquarters in Las Vegas to receive a prize. This prize has attained a legendary status following the War, becoming a highly sought after treasure in the Mojave Wasteland.

Sometime after the Courier finds at least one of these caps, a man named Malcolm Holmes, a retired collector of these prized caps, will approach the player character and warn that the caps are highly sought after by collectors who will kill for them. He says sometimes people can be so crazed that they will attack strangers if they simply believe they have any. He also warns to steer clear of a man named Allen Marks, who is said to have killed several people for the caps and is somewhat of a professional collector.

The caps are thought to be very valuable, and according to a legend they allow access to a secret treasure guarded by a man named Festus. When asked about Festus, Malcolm says he has been guarding the treasure since before the Great War, which he says "would make him pretty damn old." He states that he has met a few people who claim they have actually seen Festus and that these people "aren't the lying type." The treasure’s contents are unknown, although Malcolm hints that it could be money, technology, or other pre-War items whose actual value is unknown. The star bottle caps are still occasionally found, as the treasure's guardian still distributes them.

After finding at least 50 Sunset Sarsaparilla star bottle caps, the player character can approach Festus at the Sunset Sarsaparilla headquarters, which will initiate the directly associated quests, The Legend of the Star and A Valuable Lesson. Completing these quests will lead the player character to the prize for collecting these rare caps, about 1500 regular bottle caps, 319 toy deputy badges (which have no monetary value), and Pew Pew, a unique laser pistol.

The following is a list of 100 fixed locations where star bottle caps can be found throughout the Mojave Wasteland. Additional star caps can occasionally be acquired from non-player characters or by drinking Sunset Sarsaparilla.

According to Joshua Sawyer, the star is a reference to the Tootsie Pop urban legend: being able to redeem 100 wrappers depicting a young Native American shooting a star for a free Tootsie Pop.

One in Aerotech Office Park

In the Jacobstown bungalow, near the skeleton of a cheater

A few at the Grub n' Gulp rest stop

On the kitchen table of Hell's Motel

Two at the emergency service railyard

One on a crate at Camp Guardian
Add an image to this gallery
Retrieved from "https://fallout.fandom.com/wiki/Sunset_Sarsaparilla_star_bottle_cap?oldid=3330211"
Community content is available under CC-BY-SA unless otherwise noted.