The Sunset Sarsaparilla Company was founded in 1918,[2] making it 126 years older than the Nuka-Cola Corporation. According to Festus, a small town saloon owner decided one day to brew a new type of soft drink. He asked his usual patrons what flavor they would want it to be, but they were of no help. However, a stranger at the end of the bar suggested he make a sarsaparilla flavored drink, and would give his family's recipe to the saloon owner if he got to sample a bottle whenever he wanted to make sure the recipe was being followed to the letter. The saloon owner agreed, thinking it would make him rich. The stranger then left to meet him the next day at sundown. The next day, the saloon owner was told by the sheriff that the stranger was killed by bandits on the side of the town road. Cursing his luck, the saloon owner closed his store early that day, just as the sun began to set. But after he locked the doors, he found a bottle with a note under it sealed with blue wax in the shape of a star. Opening it, he found the recipe of a sarsaparilla-flavored drink. After sampling the contents of the bottle, and finding it singularly delicious, he began selling Sunset Sarsaparilla and even paid for the stranger's funeral, believing that it was the least he could do for his mysterious benefactor. To this day, some bottle of Sunset Sarsaparilla have a bottle cap marked with a blue star that some say the saloon owner mandated, while some say it is the stranger continuing to sample the bottles like he was promised.[3]

After years of selling their beverage and becoming known and loved across the West Coast, the company soon decided to invest in automation and robotics, specifically with the help of RobCo Industries.[4] While the custodial staff reaped the benefits of automation,[5] the regional distribution network unfortunately suffered replacement at the hands of an experimental robot.[6][7][4]

At some point before the Great War, a TV network broadcast an advisory about the health risks of their soda, with studies claiming a wide range of harmful side effects came from having too much of it. Sunset Sarsaparilla disputed the claims as unverified and based off larger quantities of Sarsaparilla than anyone could possibly drink. Nevertheless, the company took steps to improve its PR after the story aired.[8]

By 2077, the company had continued to boom, although they struggled with sales in the Northeastern region, they sold more in the Northern and Midwestern United States, continuing to sell extremely well in the American Southwest.[9] However, by sheer luck, a rumor of a contest surfaced, telling of the company having a contest to redeem starred bottle caps for prizes. Despite the complaints of staff,[10] the company decided to promote the contest rather than denounce the rumor, due to 300% increases in sales.[11] The company also went as far as to install an automaton in the lobby of their headquarters, as well as creating an advertisement campaign heavily based on cowboys.[12]

Before the Great War, a competitor attempted to negotiate a deal to buy out the Sunset Sarsaparilla Company, but the offer was declined. On the other end of the deal was no more than John-Caleb Bradberton, founder, CEO, and president of the rival Nuka-Cola Corporation. In response to this failed deal, he commissioned the development and release of a root-beer flavored variant of his signature drink. A regional exclusive to the area surrounding the famed Nuka-World theme park, the end result was Nuka-Cola Wild, an attempt by Bradberton to capitalize on the success of the Sunset Sarsaparilla brand.[13]

The star cap story began as a simple promotional story before the Great War, yet Festus kept the story alive by motivating survivors to collect Sunset Sarsaparilla bottle caps, and as the years went by, a new legend began to circulate around the bottling headquarters in Las Vegas, which in turn led to the announcement of the running "Legend of the Star" collection campaign.[1] Stories of the contest became very distorted following the Great War, and the actual simple prize (which consisted of a retelling of the fictitious story by the company spokesbot and a small metal Sunset Sarsaparilla deputy badge) became a bloated tale of pre-War technology, weapons caches, and all sorts of other amazing loot.[14]

The products of the Sunset Sarsaparilla Company appear in Fallout: New Vegas and are mentioned in the Fallout 4 add-on Nuka-World.[15] 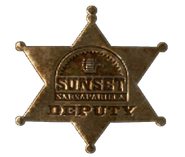 The headquarters for the Sunset Sarsaparilla Company

Middle t-shirt as seen in the Creation Club