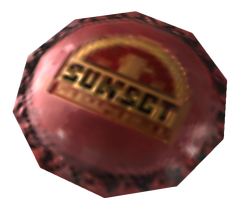 Sunset Sarsaparilla (also known as the Beverage of the West Coast) is a well-known consumable item in Fallout: New Vegas.

According to Festus, a saloon owner one day decided to make a new type of soft drink. He asked his customers what flavor they would want it to be, but they were of no help. A stranger at the end of the bar suggested him to make a sarsaparilla flavored drink, and would give his family's recipe to the saloon owner if he got to sample a bottle to make sure the recipe was being followed to the letter. The saloon owner agreed, thinking it would make him rich. The stranger then left to meet him the next day at sundown. The following day, the saloon owner was told by the sheriff that the stranger was killed by bandits on the side of the town road. Cursing his luck, the saloon owner closed his store early, just as the sun began to set. After he locked the doors, he found a bottle with a note under it sealed with blue wax in the shape of a star. Opening it, he found out that it was a recipe of a sarsaparilla-flavored drink. After sampling the contents of the bottle, and finding it singularly delicious, he began selling Sunset Sarsaparilla. However, this is likely to be largely a promotional story which may only have a hint of truth in it. The drink is, apparently, 126 years older than Nuka-Cola.

Sunset Sarsaparilla is a root-beer-type carbonated beverage found around New Vegas. With its easy availability and low cost, it is an excellent consumable that provides a high health regeneration effect. Thanks to these factors, it supplements the somewhat-scarce stimpaks as a primary healing item in the Mojave. Company spokesbot Festus provides a comical list of potential side effects, but only while playing in Hardcore mode does drinking Sunset Sarsaparilla have the negative effect of mildly dehydrating the Courier.

With the Honest Hearts add-on installed, the Courier can obtain a recipe and make a home-brewed version of the drink. This is identical to the standard variety.

Sarsaparilla is a type of bitter root found in Central America which was originally used for medicinal purposes; owing to the root's bitterness, it was combined with sweetened water to make dosing more palatable. In America, the bark and oil of the sassafras tree was added to the formula; this root beer eventually became a popular drink in the late-19th-century Old West. The similarity of the two roots' names led to the informal nickname of "Sasparilly." 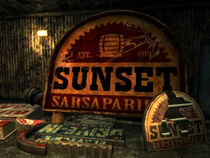 The headquarters of the Sunset Sarsaparilla company

Bottle caps found in the Mojave 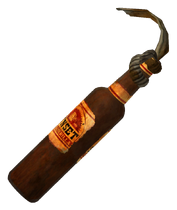 Sunset Sarasaparilla bottle used for a Fire bomb
Add an image to this gallery
Retrieved from "https://fallout.fandom.com/wiki/Sunset_Sarsaparilla?oldid=2313781"
Community content is available under CC-BY-SA unless otherwise noted.