Sunset Sarsaparilla is a consumable soda in Fallout: New Vegas. Before the Great War it was advertised as "the most popular Beverage in the West!"[1]

The Sunset Sarsaparilla Company was founded in 1918, since becoming known across the former United States for its sarsaparilla flavored soft drink.[2][3] By 2077, the soda's popularly had spread nationwide and into Canada, despite competition from Nuka-Cola Corporation's Nuka-Cola Wild, an attempt to replicate the soda's flavor and success.[4][5]

Despite the widespread success of the drink, a study was conducted that claimed the soda was hazardous to consumers' health. Broadcast on television, the study showed that consuming large quantities of the product resulted in a wide range of harmful side effects, including kidney damage, nausea, digital numbness, anxiety, loss of visual acuity, dizziness, occasional nosebleeds, joint inflammation, tooth decay, sore throat, bronchitis, organ rupture, and halitosis. Sunset Sarsaparilla disputed the claims as unverified but took steps to improve its PR after the story aired in attempt to mitigate any further financial loss. Such as the case with the creation of Festus, a robotic kiosk made in the image of a "hard of hearing" old-westerner.[6]

After the war, Sunset Sarsaparilla can still be found in New Vegas and surrounding region. Some specially marked bottles of Sunset Sarsaparilla do have a special blue starred cap and loose blue caps are found scattered around several desert locations.

Sunset Sarsaparilla is a root-beer-type carbonated beverage found around New Vegas. With its easy availability and low cost, it is an excellent consumable that provides a high health regeneration effect, while also lacking the radiation present in other drinks. Thanks to these factors, it supplements the somewhat-scarce stimpaks as a primary healing item in the Mojave. Company spokesbot Festus provides a comical list of potential side effects, but only while playing in Hardcore mode does drinking Sunset Sarsaparilla have the negative effect of mildly dehydrating the Courier.

With the Honest Hearts add-on installed, the Courier can obtain a recipe and make a home-brewed version of the drink. This is identical to the standard variety.

Found in Sunset Sarsaparilla vending machines throughout the Mojave Wasteland.

Sarsaparilla is a real world soft drink of the same name, popular in the United States beginning in the 19th century. It was originally made with safrole, an oil used as the flavor additive. In the United States, the FDA banned the use of safrole in 1958 as it had been shown to induce liver tumors in rats.[7] 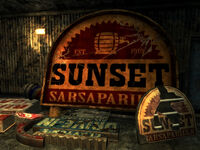 The headquarters of the Sunset Sarsaparilla company 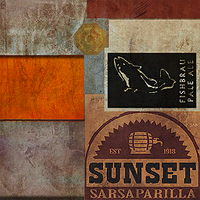 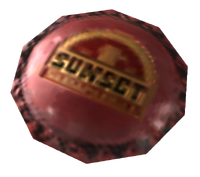 Bottle caps found in the Mojave 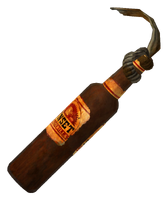 A few trucks sitting outside the HQ