Key to the Past
Tadpole Athletics Test

Sunnytop Ski Lanes is a location in the Savage Divide region of Appalachia.

The northern-most ski resort in Appalachia, Sunnytop Ski Lanes was one of many popular skiing destinations in the region. The resort featured four ski lanes: Massey's Tumble (green circle), Good Times (blue square), Friendly Hills (blue square), and Champion (black diamond).[1] The lifts were in operation from 9:00 AM to 4:00 PM and ski lessons were available every other Monday at 9 AM.[2]

The resort had multiple questionable business practices including encouraging unskilled skiers to learn by practice, declaring "What's the worst that could happen? Fortune favors the bold!"; requiring guests to tidy their suite prior to departure at the cost of a "mandatory housekeeping gratuity"; and requiring guests to self-check-out prior to 8:30 AM using the in-room terminals before returning the room key to the front desk, also at the cost of additional administrative and check-out fees.[2] This led some members of Appalachia's high society to look down upon Sunnytop, to the point of shuddering in disgust at the mention of its name.[3]

The resort had marketed four skiing promotions, "Marco Polo Ski Challenge," "Ski-Through at Sunnytop Grill," "Ye Olde Ski Joust," and the "Three-Legged Ski Race,"[4] of which the latter resulted in injuries to fourteen guests.[5] To cap off the mismanagement of the resort, the water feed line to the snow-making machines was "mixed-up" with the sewage disposal line, resulting in a banning of all ski slope usage until "the snow color reverts to white."[6]

Following the Great War, Margie McClintock and her raider group, the Diehards, took over the resort as their base of operations. In the following months/years, the group preyed on travelers and worked in conjunction with the cultist group at the Palace of the Winding Path.[7] After they went extinct, the lodge was claimed by new tenants.

This location is composed of a large building and a ski lift station at the back. There is a walkway that goes around the property, leading into a number of guest rooms as well as to the ski lift station. A fence has been built at the front of the building, with a watchtower looking west towards the road from Sunnytop Station. The entrances to the building have been trapped so care should be taken when entering. The main building contains guest rooms, recreation areas, and a large locker and ski rental area, all of which would have been used by vacationing skiers prior to the Great War. It has several sections that can be accessed directly from the reception area.

The reception desk is staffed by a petrified corpse. A Sunnytop marketing memo sits on the desk and the Sunnytop Ski Lanes room 6 key hangs on a board behind the desk, attached to a keyring in the shape of a Nuka-Cola Quantum. A flight of stairs directly to the north of the reception desk will lead to an upstairs area with a balcony. The southern section of the building can be accessed via the balcony. Both the main northern and southern sections of the building can be accessed from the ground level.

Guest rooms #2 and #3 are situated in the northern section of the building. Both rooms have chained doors that lead to the exterior of the building and eventually around to the ski lift station at the back. A functioning guest terminal can be found in room #2.

The southern section of the building first opens up into a lounge with a fireplace and a banjo that the player character can play. A corridor leads from the lounge to guest rooms #4 and #5. Guest room #4's occupant is a blue garden gnome wielding a tire iron and guest room #5 contains a first aid. There are two flights of stairs which can be accessed from this section of the building - one leading up to more guest rooms and one leading down to the basement and ski rental area. Upstairs is guest room #6 which can be unlocked with the key found at reception.

The door to room #6 is trapped with a tension trigger and a missile launcher will fire at the entrant if it is tripped. Room #6 consists of two conjoined rooms, one of which contains a steamer trunk and a chained door leading back out to the upstairs landing.

At the bottom of the stairs leading to the basement is a power armor station which often contains a power armor chassis. In this main ski rental area there are many lockers and both a weapons workbench and armor workbench directly opposite the main counter. Vincent Fried's terminal is attached to the wall between the counter and the main bank of lockers. Many wooden and composite skis can be found in this room.

A large deck area is located at the back of the building. There are many tables and chairs in this area as well as a drained hot tub. A cooking station is surrounded by deck chairs, overlooking the Savage Divide to the southeast. The ski lift station and main Sunnytop ski lift are also found here to the northeast of the main building. The starting line of a Pioneer Scouts athletics course is next to the ski station. Following the ski lift down the mountain will lead to the Sunnytop Ski Lanes base lodge.

The lodge is large and shaped like the letter Z, stretched out on a north-south axis. The central building is flanked by the main gate and courtyard in the west (with several intact vehicles and lots of open spaces for fighting) and the rear deck, which once provided guests with access to the slopes and luxury amenities. Now all of it is derelict, surrounded by traces of raider presence. The deck contains a potential Vault-Tec bobblehead spawn in the skiing lift operator's hut, with a potential magazine spawn by the jacuzzi (near the rear courtyard). Another potential magazine spawn can be found by the northwestern end of the building, with a potential bobblehead spawn on the opposite side.

The main lodge has three distinct floors. The central floor spans the length of the building and contains the reception and foyer in the center (check by the fireplace for a potential magazine spawn and the reception keyholes for a key to the locked room in the northwest). Off to the south are the dining area and bar, with an intact banjo to get the Well Tuned bonus. At the southeastern tip are two guest rooms. On the opposite end are the rooms used by the raider leaders. In Margie's room is her terminal, a potential bobblehead, a locked safe, and Margie McClintock's Holotape.

Upstairs at the southern end lies another guest room with a steamer trunk in the back, but the door is trapped: Opening it triggers a trap that will fire at the door immediately. The central part of the upper floor overlooks the foyer and contains minor loot scattered around the lounge.

The basement below the foyer served as a rental shop and locker room for the vacationers. Behind the counter is a terminal (related to Key to the Past) with a potential bobblehead spawn next to it, with weapons, armor, and a potential magazine spawn opposite. Around the bend, near the staircase leading to the foyer, is a power armor station with a random power armor spawn.

The "Massey's Tumble" ski lane at the resort is a reference to level designer Steve Massey. 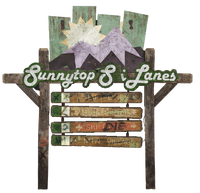