Sunglasses are a piece of eyewear in Fallout 4.

Lightly-tinted, browline-design sunglasses, they increase the wearer's Perception by 1 when worn.

The sunglasses are identical in appearance to the eyeglasses, with the only difference being tinted lenses. 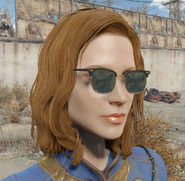