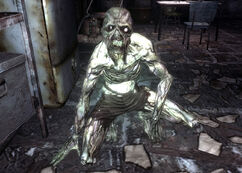 The Sun of Atom is a non-hostile glowing one living in the basement of the Holy Light Monastery in 2277.

When a human transcends mortality and straddles the ether, they can be seen to be both living in the "real" and "spiritual" realm. Mother Curie III firmly believes her own son to have taken the final few steps on this journey. In fact, much of her son's higher functions have disappeared, and only instinct is preventing this confused glowing one from attacking.[1]

Sun of Atom is one of two non-hostile feral ghouls in the monastery, the other is Atom's Champion.

Sun of Atom appears only in the Fallout 3 add-on Broken Steel.

Retrieved from "https://fallout.fandom.com/wiki/Sun_of_Atom?oldid=3382420"
Community content is available under CC-BY-SA unless otherwise noted.