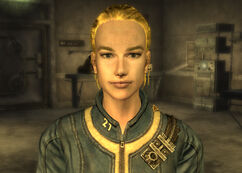 “Leather suits are good times! Thinking about that just blows my top!”

Suits You, Sarah[1] or Vault Gear[2] is an unmarked quest in Fallout: New Vegas, given to the Courier by Sarah Weintraub.

After following the correct dialogue tree, the player character will be able to sell vault jumpsuits to Sarah. She will accept jumpsuits from any of the in-game vaults other than Vault 21. With a Barter check of 65, she will accept Boomer jumpsuits and Boomer flightsuits. Vault 3 suits can also be bought at Mick & Ralph's, but they will only have up to four suits, and once purchased they do not restock.

Vault 3 and Vault 11 both have large numbers of jumpsuits in dressers in their living quarters. See vault jumpsuit for the locations.

Retrieved from "https://fallout.fandom.com/wiki/Suits_You,_Sarah?oldid=3205773"
Community content is available under CC-BY-SA unless otherwise noted.
... more about "Suits You, Sarah"
RDF feed
Has platform
PC +, Playstation 3 +  and Xbox 360 +