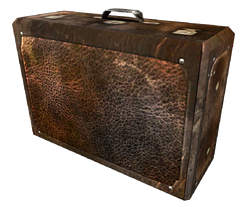 A suitcase is a type of container found in the Capital and Mojave Wasteland.

The suitcase is a normal leather suitcase with straps of leather and decorative metal rivets. A little more than a narrow half-cover with three hinges. For ease of carrying is provided with a metal handle. When interacting with the container animation plays.

The suitcase can contain a variety of items:

The suitcases contain various common items, such as:

Retrieved from "https://fallout.fandom.com/wiki/Suitcase_(Fallout_3)?oldid=3108105"
Community content is available under CC-BY-SA unless otherwise noted.