One of Us
Prototypical Problems

As a government surveillance facility, Sugar Grove, among other projects, monitored the miners of Appalachia for seditious sentiments (such as calls for unionization and anti-automation,[1] complex investigations of money trails for Chinese connections,[2] and as the situation in Appalachia escalated following the increase in automation and the Free States' secession, investigating strikers[3] and keeping tabs on the secessionists.[4] All collected intelligence was documented and deposited in the facility's archival system.[5] Sugar Grove SigInt was staffed by marines.[6]

In just one instance, Edgar Aarsen, a random Appalachian, attracted attention for his union attendance in March 2075. A surveillance warrant was issued on August 13, with an arrest warrant following just two days after New Year's. Within three months Aarsen was dead, with his children, Martin and Olivia, adopted within a month.[7] The facility was also experimenting extensively with a variety of surveillance technologies through the Advanced Research Projects Division. One of these projects was the Somnus Initiative, an initiative that used hypnosis and drugs to turn willing folks into sleeper agents used by the Navy. Disguised from other analysts as external contractors, the initiative started in late August 2077 and the numerous Appalachians were abducted.[8][9][10]

These include BR-04, Project LOCUST, which sought to develop a self-directed Vertibot swarm capable of covertly accessing enemy installations and extracting data of interest. It was abandoned after engineering estimates indicated that Vertibots equipped with Project LOCUST technology was too large, making covert actions by a swarm infeasible.[11] RD-68 BARRIER attempted to develop an electromagnetic suppression field capable of dampening gamma radiation, providing a counter to radiation weapons and enabling operations directly after a tactical nuclear strike. Although initial tests were promising, the field emitter required exponentially more power to operate at scale.[12] KM-41 SPOTLIGHT was an attempt to develop a neutrino pulse emitter capable of remotely scanning enemy installations and reconstructing an internal map of the facility. A field test conducted on a civilian office building on June 22, 2077, resulted in mass civilian casualties following a sudden mass psychotic episode. The project was scrapped, though its potential usefulness for military applications was noted.[13]

Other projects include CX-15 or Project SIPHON, an attempt to develop an automated data exfiltration holotape by Patricia Nunes, capable of scanning hostile networks, detecting data sources of interest, compressing the data, and extracting it for later analysis. By June 2077 it achieved a successful data compression ratio of 200:1, but the cost of iridium-infused magnetic tapes ($15 million per holotape), and multiple personal use issues resulting in two lost tapes, forced the project to be put under tight control.[14] Access was strictly limited to covert operations specialists of Grade-V or above with prior authorization, with the head of the SigInt Analysis team forcing the system to log every check-out of the holotapes. After all, a single SIPHON was twice the annual budget of the entire SigInt Analysis division.[15]

However, while SIPHON siphoned resources, it was dwarfed by Kyle Lockhart's EX-72 PULSAR, an attempt to develop tactical electromagnetic pulse (EMP) weapons for use of disabling or destroying electronic security systems of any kind in the field.[16] Although the project called for extensive testing and analysis, progress was slow. A test cycle required the analysts to fire the weapon, break down the robot, analyze the damage, reset and recalibrate, repeat. Even with a fabricator on-site, they could only perform four tests on a good day. October 4, 2077, represented that peak capacity.[17] As a talented engineer, Lockhart soon managed to create a workaround: He could set up the fabrication pod to assemble a robot, pipe the fabricator's steam release into a hydraulic actuator to trigger the weapon, and then have the fabricator disassemble the robot and save off the results. The whole cycle took about eight minutes. Lockhart took the next week off for a well-earned vacation, leaving the testing on automatic.[18]

Lockhart neglected to inform his colleagues about the experiment and auxiliary generators had to be brought online.[19] On the 11th, the routine started to consume runaway amounts of storage[20] and forced the facility to tap into the Monongah power grid after the tests burned out eight generators. The tap siphoned enough power to cause brownouts.[21] By the 13th, the routine consumed all available data space, forcing a secondary tape drive to be brought online. This continued until 58 tape drives were completely filled, i.e. all the available storage in the facility.[22]

Lockhart returned to work on the 18th, to a mound of junk data filling up the drives and no way to efficiently analyze it all. General Thomas McAllen, responsible for oversight at the facility, took notice of the impact Lockhart's test had and threatened to fire Lockhart for interfering with a facility crucial to the war effort. Lockhart was given a week to provide a report and an explanation for the incident.[23][24]

In 2103, MODUS would target the facility, seeking to reestablish its severed connections and tap into the vast Appalachian surveillance network.[25] Sugar Grove was also partly under the direction of the United States Space Administration. ATHENA, the Deep Sleep project AI, was located in the facility's data center. Sugar Grove also functioned as a USSA beacon, which is why commander Sofia Daguerre crashed in Western Virginia, her pod's safety measures landing her near an available USSA facility.

The opening area contains offices and a reception desk, together with a number of robots and a turret. Access to the facility and the bunker is through the door in the back. Players can access the roof of the structure by crossing one of the fallen trees from the cliff overlooking the building. The complex can alternatively be entered through a hole in the roof.

The interior is divided into three distinct sections. The first one entered is the office area, where analysts tried to crack the secrets of the intel provided to them. The main feature is the pile of once-secret documents in the center of the room, surrounded by gas cans and ready for a send-off. The adjacent rooms are mostly empty, save for minor loot, and piled-up furniture. The corridor in the back leads between two derelict conference rooms down below.

At the bottom of the staircase, through low-level robots, lies the security checkpoint and more offices to the side. The offices contain traces of habitation and wrecked office equipment, as well as an intelligence dispenser (used in the quest One of Us). The checkpoint contains hallways covered by a pair of ceiling-mounted turrets. They can be disabled from the booth in the landing area.

Through the checkpoint is the heart of the facility, with broken DEFCON indicators welcoming newcomers to the blacksite. To the right is a hallway leading up to the Sugar Grove director's office, with a terminal and loot. To the left is a hallway that leads to the aforementioned Advanced Research Projects laboratory, filled with rogue robots courtesy of Lockhart's fabricator and the ARP terminal. Down the center lies the SigInt hall.

The SigInt hall contains signals intelligence analysts' terminals (where the player character has to upload MODUS' holotape during One of Us), various holotapes about cryptid sightings, a conference room to the left and the archives chamber - mostly spotless, save for radroaches - to the right. The archives chamber contains a safe at the far end. In the far left corner, on top of the computer and near the safe, is a wooden crate. The opening faces the wall, but it contains the blacksite guard key needed to access the Somnus division.

Accessed from the rear of the facility, the facility requires the Blacksite guard key, located in the Archives wing of the SigInt facility (see above). Once inside, down the flight of stairs lies the Somnus facility, where the Navy processed abducted citizens to turn into sleeper agents. It is shaped like a circle, with the infirmary and processing chamber in the northern half and the cells in the southern. The control center and break room for the staff is to the west. The cells are locked. Three of the necessary keys are located on the trolley in the break room, while another is on the shelves in the processing room control chamber.

Sugar Grove appears only in Fallout 76. 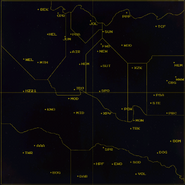 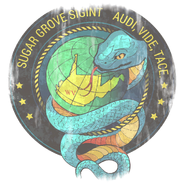 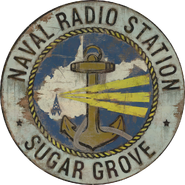