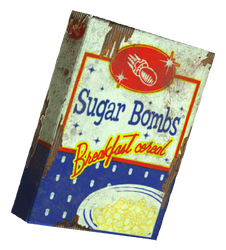 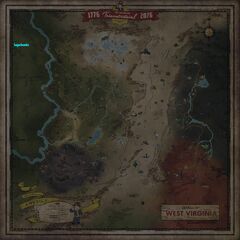 Sugar Bombs is a consumable item in Fallout 76.

A pack of sugary cereal that holds 100% of the recommended daily amount of sugar, Sugar Bombs have been preserved for 25 years after the Great War. However, this also caused a bit of radiation to slip in for most of them. There is a rarer, pre-War version with a cleaner look that lacks radiation, though it cannot be used in crafting recipes that require Sugar Bombs.

The non-irradiated version of Sugar Bombs cannot be used in the Pioneer Scouts Tadpole cooking challenges.

Retrieved from "https://fallout.fandom.com/wiki/Sugar_Bombs_(Fallout_76)?oldid=3187950"
Community content is available under CC-BY-SA unless otherwise noted.