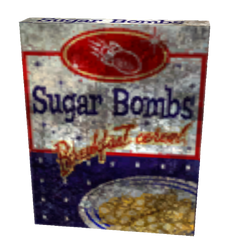 Sugar Bombs are a consumable item and crafting component in Fallout: New Vegas.

This section is transcluded from Sugar Bombs. To change it, please edit the transcluded page.

Sugar Bombs is a pre-War breakfast cereal that can be found all around the Wasteland, packaged in white and blue boxes with a red ovoid logo at the top, fully labeled as "Sugar Bombs breakfast cereal." Numerous promotional posters can be found posted on walls around the wasteland, touting the Sugar Bombs' "explosive great taste!" and some supposedly contain a "free Captain Cosmos decoder ring," though one has yet to be found. The cereal pieces themselves are modeled after atomic bombs, resembling the Fat Man, or perhaps more relevantly, a mini nuke.

Within Fallout: New Vegas, Sugar Bombs are now individually distinct from most other "basic" food items. The most obvious difference from Fallout 3 is that they now provide a limited boost to maximum Action Points, similar to chems such as Jet or Rocket. Comparatively, this boost is small, but stacks with other similar effects while not carrying any risk of addiction.

Sugar Bombs are used as ingredients in several crafting recipes:

Apart from appearing randomly in refrigerators and similar containers, there are numerous fixed locations where Sugar Bombs are certain to appear:

Come Fly With Me - The Courier can persuade Chris Haversam to sabotage the rockets at REPCONN test site. He will request three boxes of Sugar Bombs along with a thrust control module and Isotope-239 igniting agent, in order to sabotage the Bright Brotherhood's journey to the Far Beyond.

Retrieved from "https://fallout.fandom.com/wiki/Sugar_Bombs_(Fallout:_New_Vegas)?oldid=3494046"
Community content is available under CC-BY-SA unless otherwise noted.