Fallout 4
“Education is what survives when what has been learnt has been forgotten.”— Welcome sign

Suffolk County Charter School is a location in the Commonwealth in 2287.

In exchange for funding, Principal Jackie Hudson agreed to implement the government's experimental Nutritional Alternative Paste Program (NAPP) at the school. Participation required limiting food consumption within the school to a food paste developed by Vault-Tec and the United States government.[Non-game 1] This decision was apparently made without the consent of faculty, students, or parents.

Per Principal Hudson's announcements, the NAPP was launched on October 18 and any outside food was to be confiscated. These announcements can be heard on three holotapes found throughout the school. According to a letter drafted on Mr. Davidson's terminal, both faculty and students were unhappy with the NAPP. The draft indicates that a week of paste consumption seemingly resulted in an increase in problematic student behavior and "pinker" complexions in everyone.

The school grounds are inhabited by pink feral ghouls. Two main floor entrances are available, including the southwest front door and the southeast back door. Just outside the school, at the northeast corner, is a water pump. To the south of the school is the Murkwater construction site, which is home to a mirelurk queen.

The interior is also inhabited by pink feral ghouls, including a glowing one in the upstairs library. A chemistry station is upstairs in the lab classroom to the west, and a cooking stove is behind a Novice-locked door adjacent to the stage in the cafeteria.

The building consists of three levels, including the first floor, second floor, and basement. Upon entry through the front door, the reception office and adjoined principal's office are on the right, and a hole in the wall on the left leads to a restroom. In the center is a collapsed stairway to the second floor, with a hallway on either side. The hallway to the left leads to the restrooms and a series of classrooms, and the hallway to the right leads to the cafeteria, the entrance to which is initially chained from the opposite side.

The collapsed staircase can be used to reach the second floor by jumping from the railing or topmost step. The second floor can also be accessed using an intact back staircase via the working elevator that runs between the basement and first floor. Due to rubble blocking direct access to the staircase, this method requires one to traverse through the classrooms off the first floor's left hallway, and then through the basement via the hole in the cafeteria floor. In the basement, behind a door opened from an Expert-locked terminal, a mattress can be found.

Suffolk County Charter School appears only in Fallout 4 and is mentioned in Fallout: Wasteland Warfare.

Feral ghouls covered in pink paste outside the school

Concrete structures to the south-southwest 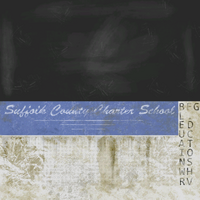