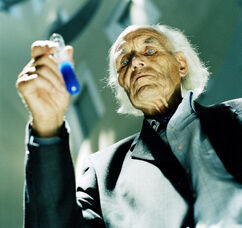 Successfully knock out or kill the engineer without alerting Presper and his men was going to be a quest in Van Buren, the canceled Fallout 3 by Black Isle Studios. It was located in B.O.M.B.-001's command center.[1]

If the Prisoner has successfully sneaked past the security bots on the central hub, which in turn does not set off the internal alarms, then they can try to sneak up on the engineer who is busy fiddling with a computer on the southwest side of the engineering room. They must attack with a quiet weapon (unarmed or un-powered melee) and successfully subdue the engineer before he has a chance to run to the alarm on the opposite wall.

If he makes it to the alarm, Coleridge and his boys will storm in, guns a blazing, should they not have been killed earlier at the Grand Canyon.

Retrieved from "https://fallout.fandom.com/wiki/Successfully_knock_out_or_kill_the_engineer_without_alerting_Presper_and_his_men?oldid=2151443"
Community content is available under CC-BY-SA unless otherwise noted.