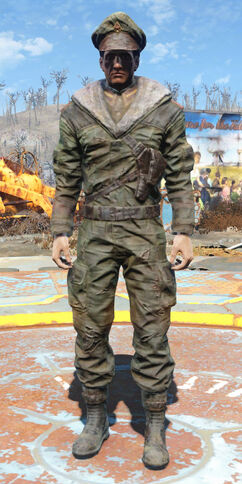 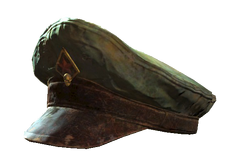 The submariner uniform and submariner hat are an outfit in Fallout 4.

The submariner uniform is a jumpsuit used by the Chinese Navy before the Great War along with the combo cover. The outfit was meant for submarine personnel, possibly just officers. The uniform underneath the coveralls looks similar to the Chinese jumpsuit but has an officer's collar and has buttons, unlike the Army version.

The jumpsuit consists of green coveralls with several cargo pockets on the arms and legs, a brown leather belt, and a brown leather handgun chest-rig. It is capable of being upgraded with the ballistic weave if the player has unlocked it from Tinker Tom.

The submariner hat is a peaked cover of a Chinese naval officer and is a variant of the sea captain's hat. The cover features a green upper, brown leather visor, brown leather band, no chin strap (unlike the U.S. Navy), and an insignia of a communist red star in a gold diamond with a small gold skull pin below. 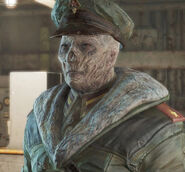