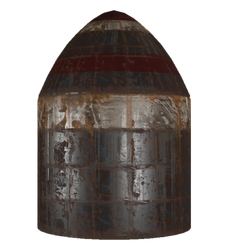 The submarine-launched ballistic missile (often abbreviated SLBM) is a world object in Fallout 4 located on the Yangtze.

The SLBM, with a range less than that of a intercontinental ballistic missile, is designed to launch a nuclear payload from a submarine close to the enemy's shoreline.

The Yangtze carried six SLBMs, with high yield warheads, on board during her patrol of the U.S East Coast in October 2077. She was in the vicinity of Boston when the Great War began, launching all but one of her SLBMs, which failed to launch.

USS Democracy carried four SLBMs, with high yield warheads, on board in October 2077. Due to a firing system malfunction and a containment breach, only one of the missiles was launch capable.

Retrieved from "https://fallout.fandom.com/wiki/Submarine-launched_ballistic_missile?oldid=3061908"
Community content is available under CC-BY-SA unless otherwise noted.