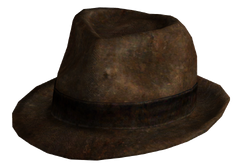 The suave gambler hat is a unique piece of headwear in Fallout: New Vegas.

It does not provide any Damage Threshold, but provides a bonus of 1 to Perception and can be repaired with pre-War hats. The female version is a "pillbox" hat with large black feathers in front; the male version resembles the pre-War hat, but of a different style.

The hat and its related Wild Wasteland event are a reference to an infamous scene in the 2008 film, Indiana Jones and the Kingdom of the Crystal Skull, in which Jones survives a nuclear blast by locking himself inside of a lead refrigerator.