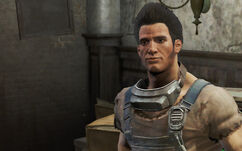 “My old man taught me that duct tape could fix anything. I don't think he was talking about bullet holes.”

Sturges is a handyman from Quincy traveling with Preston Garvey's group in the Commonwealth in 2287.

An escaped synth, Sturges is a talented repairman, capable of fixing anything that passes through his hands. He also possesses considerable knowledge of the pre-War world, but unfortunately, all that knowledge doesn't translate into hacking or lock picking talents. He was a long-time handyman in Quincy, before the city fell to the Gunners, responsible for restoring power armor frames bought from the Atom Cats garage to full functionality.[1] Shortly after, Mama Murphy had a vision of Quincy getting overrun, and convinced Jackson to contact the Minutemen.[2] After the Minutemen's arrival and routing the initial Gunner attackers he lamented that the one he had on hand couldn't be used to lift lumber to fortify the defenses across the city.[3]

Sturges (along with Preston Garvey) is named after and bears a strong resemblance to the famous American playwright, screenwriter, and film director Preston Sturges. 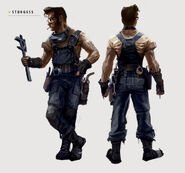 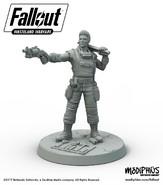 Retrieved from "https://fallout.fandom.com/wiki/Sturges?oldid=3109268"
Community content is available under CC-BY-SA unless otherwise noted.