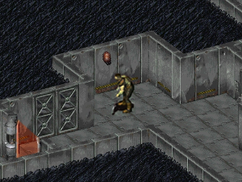 The stupid mutant is one of the Master's super mutants, stationed inside the Mariposa Military Base around 2161, and is currently standing guard at the supply room.

One of the many humans that were dipped into the FEV vats, mutating them into their current form. A side effect of this is being less intelligent than before, which is uncommon in first generation super mutants.

The stupid mutant appears only in Fallout.

Retrieved from "https://fallout.fandom.com/wiki/Stupid_mutant?oldid=3391277"
Community content is available under CC-BY-SA unless otherwise noted.