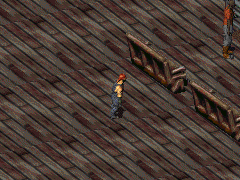 “Look. Just because I'm not of so-called "average height" does not mean I have to receive my thrills vicariously.”— Stuart Little

Stuart Little is the diminuitive boss of the Jungle Gym in 2241.

A dwarf in children's clothes, the red-haired Stuart is usually chewing on a toothpick and studying promising young boxers.[1] He has a knack for spotting fledgling talent and coercing people into fighting for him. While he wishes he was just a little taller to fight in the ring, he is, nonetheless, accepting of his body and does not take too kindly to people relying on stereotypes and making assumptions based solely on their looks (i.e. assuming that a dwarf can't possibly make a career in boxing).

Stuart is one of the more suave and outspoken characters in the whole of New Reno and possesses several interesting lines, including a fourth-wall-breaking dialogue about stereotypes connected to character models.

Insulting Stuart about his height will prompt some hilarious fourth-wall-breaking dialogue with him mocking the Chosen One's looks, pointing out the over-muscled chest of males and the relatively large breasts of females. He goes on to conclude that the player is a "stupid min-maxing munchkin" and their character is either a "Madd Maxx

wannabe" or a "Laura Kroft

impersonator", depending on the player's gender.

Stuart Little appears only in Fallout 2.

Retrieved from "https://fallout.fandom.com/wiki/Stuart_Little?oldid=3369379"
Community content is available under CC-BY-SA unless otherwise noted.