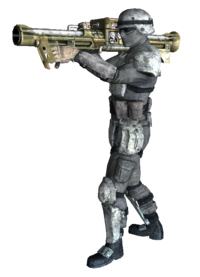 Strike teams consist of two to four members and are chosen for specific combat effectiveness. They are utilized to provide backup for the Lone Wanderer.

Strike teams include infantrymen, grenadiers, missile units, snipers, and the two robotic units: the Mister Gutsy and sentry bot. They work effectively under the command of Sergeant Montgomery.[1]

During the Paving the Way quest in the Operation: Anchorage add-on for Fallout 3, the player character commands an interactive strike team via commands to Sergeant Benjamin Montgomery.

In total the player character has five recruitment markers to spend. Once selected, their team composition is final and cannot be changed again via terminal. Replacements for dead or dismissed team members can be ordered via Montgomery. One can dismiss a team member by simply speaking to it. The gender and race of the human strike team members are random.

A rifleman clad in winterized combat armor with matching helmet who is armed with an R91 assault rifle. Costs 1 recruitment marker.

This soldier wears winterized combat armor with a matching helmet and is armed with a 10mm SMG and five frag grenades. Costs 1 recruitment marker.

Like the other human team members, snipers wear winterized combat armor with a matching helmet. Their armament consists of a trench knife and a sniper rifle. Costs 2 recruitment markers.

A costly addition to one's team, this winterized Mister Gutsy is armed with a plasma weapon and a flamer. Costs 3 recruitment markers.

The most expensive option is a winterized sentry bot with a built-in minigun and missile launcher. Costs 4 recruitment markers

Retrieved from "https://fallout.fandom.com/wiki/Strike_team?oldid=3499867"
Community content is available under CC-BY-SA unless otherwise noted.