A set of Ultracite power armor that has been completely overrun by strangler vines and other flora. When the full set is equipped, the wearer gains the Strangler heart set bonus, which adds acid damage to all armed attacks (100 over 3 seconds) and makes nearby enemies take acid damage (4 per second)

It has identical damage resistance and energy resistance to standard ultracite armor, however it has significantly higher rad resistance in comparison (393 to 500). This makes it one of the best armors in-game from a resistance perspective.

It also shares a modification pool with standard Ultracite armor. 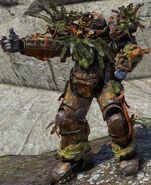 Retrieved from "https://fallout.fandom.com/wiki/Strangler_heart_power_armor?oldid=3474875"
Community content is available under CC-BY-SA unless otherwise noted.