Previously encountered by the Free States,[1] the hearts are known for infesting living creatures with vines and amassing groups of hostile creatures.

While appearing as non-hostile to players, strangler hearts are still able to directly inflict damage. When attacked, the heart will spit out a toxic gas that gives +6 rads/second. If further damaged, it will close and call for reinforcements.

The standard strangler heart variant encountered during the Heart of the Swamp public event.

A stronger strangler heart variant encountered at the end of the now-removed Dead in the Water raid mission. It has a stronger poison cloud attack that deals acid damage and increased levels of radiation.

Strangler hearts appear only in Fallout 76.

At the crashed plane 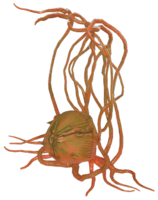