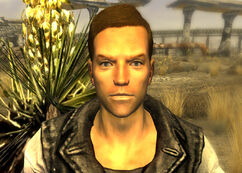 “Don't play games with me. The question was just a formality. Now do you have what we requested?”— After answering "Maybe" to "Are you the Van Graffs emissary?".

The strange man is a character living in the Mojave Wasteland in 2281.

He is a Legion agent that has been sent to pick up a package from the Van Graffs. Given his role, it is likely that he is a disguised frumentarius, serving under Vulpes Inculta. Killing the strange man results in no Karma loss, but Caesar's Legion infamy is gained.

The strange man appears only in Fallout: New Vegas.

Retrieved from "https://fallout.fandom.com/wiki/Strange_man?oldid=3153086"
Community content is available under CC-BY-SA unless otherwise noted.