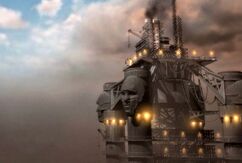 “15% chance of designated "Chosen One" succeeding in task.”— Shi Emperor

Stop the Enclave is an unmarked main quest in Fallout 2. To complete it, the Chosen One must free his people and Vault 13 dwellers from the Enclave's clutches and put an end to the organization's nefarious plans… whatever they are.

Reach the oil rig, cause a reactor meltdown, defeat Frank Horrigan, and get out alive.

After reaching the oil rig via the PMV Valdez tanker, one's first step will be to infiltrate the Enclave base, gather information and decide what to do next.

Into the oil rig[edit | edit source]

Walk into the oil rig's entrance hall. Beyond this point, the Chosen One must be wearing power armor (any type will do) and must not have any companions with them or the Enclave soldiers and turrets will attack on sight. Enclave turrets are equipped with heavy dual miniguns that can rip through power armor with ease, making fighting one's way through hardly an option.

With high enough Science skill, examining the computer terminal in the entrance hall (or other similar ones found throughout the base) will reveal all the information right away. Specifically, the compound's weak spot (Science 125%): shutting down the rig reactor's control computer will quickly lead to an imminent reactor meltdown. And the Enclave's plans (Science 150%) regarding the captured people, FEV, and the rest of the world. One can also note (Science 100%) the controls for the station's security system that require a Presidential access key to use. If the player chooses to download the Help content the terminal won't be accessible later on, making the final boss fight nearly impossible.

Down the stairs, at the detention and research level, there are many people held in cells. By talking to them, one finds out they include people from the Arroyo tribe as well as people from Vault 13. The elder tells the Chosen One that they must shut down the facility's reactor to disable the force fields in their cells. If they don't have a G.E.C.K. with them, she also urges them to find one that she heard was taken from Vault 13 and is somewhere in the rig. Martin Frobisher, the spokesman for the Vault 13 people, specifically suggests to blow up the reactor's control computer with explosives that can surely be found among the base's vast arsenal and confirms that their G.E.C.K. must be kept on the level further below and the Chosen One is free to have it.

The nearby stairs lead to the Access Corridor level where one must solve the trap room puzzle to get through. The G.E.C.K. that the prisoners spoke of can indeed be found here in the right side room, in the leftmost locker in the closet, and the character will refuse to go through the exit door until they have one in their inventory.

Further below lies the office of Dick Richardson, the "President of the United States," and his aides, as well as the laboratory of Dr. Charles Curling. Either of them finally reveals to the Chosen One the Enclave's diabolical plan to wipe out all humans on the Earth except the Enclave citizens with a FEV-based biological weapon. A plan that is literally days, if not hours, from its conclusive stage. The president also offers amazing amounts of historical and background information, mostly as a stalling tactic. The Chosen One will have to kill him because that's the only way to get his access key.

The following options are available:

With a high Speech, Dr. Curling can be convinced of the immorality of the plan and will elect to help stop the plan by the only means still available without leaving an option for anyone to start over: by releasing the toxin into the Oil Rig's ventilation system (5000 XP). It's not possible to speak to Tom Murray after this, and generic NPCs without power armor will remark they're feeling bad and after a few minutes, will start dying violently.

It's not possible to kill the president this way despite the Chosen One mentioning "giving him a taste of his own medicine" in dialogue and the president admitting that the Enclave population is not yet inoculated. Named characters except the president's secretary are not affected by the toxin.

Down the stairs northwest of the president's office, on the bottommost level of the rig, is its nuclear reactor. With the information gathered, there are two options now:

After this, as the console messages say, there are 10 minutes of game time to get out.

Likewise, it's not possible to speak to Dr. Curling after this is done.

Back on the presidential level, there's now an emergency stairwell along the southern edge of the map available (it was previously inaccessible but is now the only way up). Those stairs take one all the way up to the barracks near the entrance hall.

Back in the corridor leading to the entrance hall, there is an Enclave squad led by Sergeant Granite. He tells the Chosen One that despite the prisoners having already fled to the vessel, for them personally, there's a very big problem named Frank Horrigan who is adamant about not letting the Chosen One pass and is known to be an unstoppable killing machine. With a successful Speech check, the hero can convince them that the base will soon be ground zero, and helping them in the fight is the only way for them all to survive (the dialogue can be retried if one fails; 1500 XP).

Due to the powerful and numerous turrets, the fight is nigh-impossible to survive without the presidential keycard. By using the terminal in the room (Science 100%), one can direct the turrets to attack Horrigan instead by activating the "counter-insurgency protocol" (the disable security system option has no effect, it doesn't deactivate the turrets). The combat commences immediately. With Granite's squad to help, too, the odds will be very much in the player character's favor.

Talking to Horrigan leads to him attacking whatever the player character does and the terminal can't be used in combat, so this is not an option unless one wishes to fight the turrets.

When Horrigan falls, one can talk to him or immediately finish him off. If given an opportunity to talk, he informs the hero with his dying breath that he's activated the oil rig's self-destruct mechanism (at this point, it doesn't matter whether this is true).

All that leaves is to escape from the oil rig by leaving the way the player character came in.

After the Chosen One escapes, there is a video clip showing the oil rig destroyed by a huge nuclear explosion. After this, depending on the Chosen One's prior actions, there will be different endings.

Retrieved from "https://fallout.fandom.com/wiki/Stop_the_Enclave?oldid=3466008"
Community content is available under CC-BY-SA unless otherwise noted.