You are much less likely to be knocked down in combat.

+5 to DT versus Unarmed attacks and Melee Weapons
You cannot be knocked down in combat. 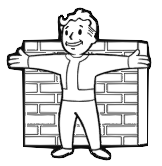 You are much less likely to be knocked down in combat.

You gain +5 to your Damage Threshold against all Melee Weapons and Unarmed attacks, and you cannot be knocked down by any means in melee combat (explosives can still knock you down).

This is useful against deathclaws, since they only use unarmed and they have a chance of knocking the player down. The perk is also useful against Legate Lanius because he only uses melee and also has a high knockdown chance.

The picture used for the perk in Fallout 2 and Fallout Tactics is a reference to The Thing, a member of the Marvel Comics superhero team The Fantastic Four.

There is a display error with this perk. The +5 DT will be shown in your Pip-Boy menu whenever you have a melee or unarmed (including none) weapon equipped. However, the added DT will correctly only apply against melee or unarmed attacks, regardless of what you have equipped. [verified]

Retrieved from "https://fallout.fandom.com/wiki/Stonewall?oldid=3310091"
Community content is available under CC-BY-SA unless otherwise noted.
... more about "Stonewall"
RDF feed
Has platform
PC +, Playstation 3 +  and Xbox 360 +