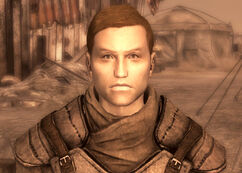 “I've heard of you. Did you figure on coming out here and helping us lowly troopers out?”

Private Stone is a soldier serving the New California Republic at Camp Forlorn Hope in 2281. He is the one responsible for stealing the camp's supply of hydra.

The New California Republic's war with Caesar's Legion has taken a massive physical toll on its citizens and the emotional and mental toll caused by the horrendous sights and events that happen during the war are a heavy burden on the soldiers who fight there. Stone is one of the troopers who is heavily laden with that burden, especially due to being located at the crucible of the worst of the fighting, in Camp Forlorn Hope. The constant terror created by the threat of Caesar's Legion raids or even a full on assault has taken a heavy toll on Private Stone, and no longer being able to handle it he begins using the hallucinogen known as hydra, which he steals from the Camp Forlorn Hope medical center at night. It gives him a temporary relief from the fear and anxiety which is constant in a place in such a dire situation like Forlorn Hope. If he is turned in he can be found in the camp jail cell.

Retrieved from "https://fallout.fandom.com/wiki/Stone_(Fallout:_New_Vegas)?oldid=3335312"
Community content is available under CC-BY-SA unless otherwise noted.