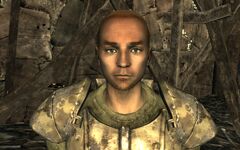 Stockholm without his headwear

“The more time I spend talking to you, the less I'm spending watching for Raiders. How the hell did you get up here, anyway?”

Stockholm is a sentry in Megaton in 2277.

Stockholm, born in 2252, is the Megaton gate guard and actually spends his time outside the city, manning the guard tower at the main gate. He is 25 and loves the sun on his back, but he isn't quite as happy with the slightly radioactive grit from dust storms in his mouth.[1]

After a successful hack attempt of Colin Moriarty's computer, it is revealed he holds a tab at Moriarty's Saloon of 8 caps.

Stockholm appears only in Fallout 3.